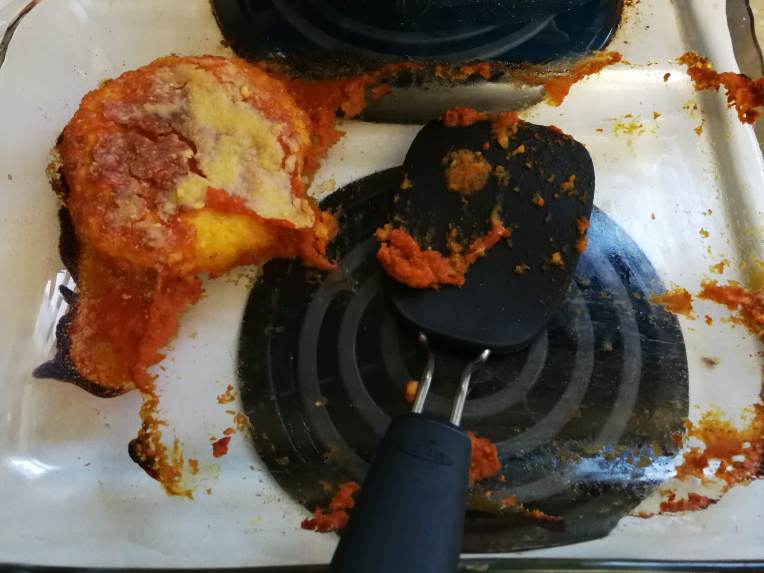 Clearly I didn’t take my picture fast enough. The family member whose dinner this is was out when dinner was ready.

This is a go-to weeknight recipe for me because it takes about forty minutes from freezer to table and it’s a family-pleaser. I serve it with microwaved frozen veggies. It would go equally well over pasta or a hamburger bun, but I’m watching my carbs.

Follow package directions to cook the chicken patties to the point where you take them out of the oven to turn them. Pour the sauce over them as evenly as you can. Cover with shredded cheese. Bake for the longest suggested time remaining (so, if it says 10 to 15 minutes more, go for fifteen.)

Tuesday nights don’t get much simpler than this, unless you’re doing Random Orange Vegetable Soup. 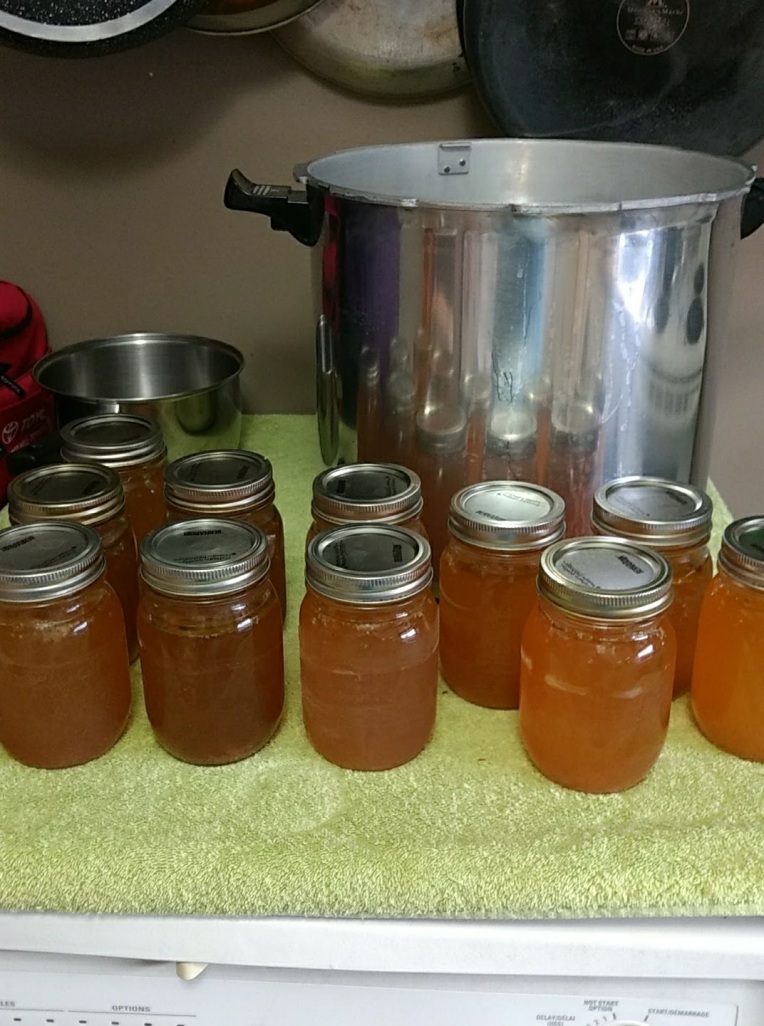 Hello and welcome to the first post in this blog!

This is my go-to chicken broth recipe. It’s more of a formula than a recipe, and it tastes slightly different every time I make it. I’ve made it with turkey carcasses, and I’ve made a veggie version with a whole lot of odds and ends from the CSA that I didn’t know what to do with. It’s a household staple.

I don’t just make this in the summer. During the winter, if I find myself grabbing a rotisserie chicken from the grocery store on the way home from work, I may drag out the pressure canner that weekend and turn its carcass into broth. We go through this stuff pretty fast so it’s worthwhile always having some on hand.

A little word about the veggies: don’t use the nice ones. When you’re making carrots for the family, take the ends you cut off and throw them in a baggie in the freezer. Do the same with onion skins and celery ends, especially the leaves. Got a slightly-squishy carrot forgotten at the bottom of the crisper? Cut out the black parts and throw it in the pot. Onions starting to sprout? In they go. Nobody ate the celery sticks that came with the wings last week? Save them for broth. Thrift is your friend, here. Don’t feel limited to these ones. Parsnips, carrot greens, leeks, wrinkly sweet potatoes or freezer-burned turnip – throw it all in there. I usually cut everything in half and then into the pot it goes.

The plan is to throw all this stuff into a big stock pot, cover with water, and boil the f*ck out of it. Keep it on a low simmer for at least four hours. Eight or twelve does not go amiss.

When it’s done cooking, you need to strain out the liquid and throw away the solids. I use a plastic colander placed in a big mixing bowl. If you want a clearer broth, use a wire-mesh strainer. You don’t have to do all the straining at once; you can fill the bowl, then fill some jars, then come back and strain more broth.

Now you’re ready to preserve or use your broth! For pressure canning basics, see here (link forthcoming.) This recipe isn’t safe for water-bath canning. To freeze, ladle it into clean containers and freeze with the lid off until it’s solid, then put a lid on; you may want to add a layer of plastic wrap to keep freezer burn at bay. If you just put it in the fridge, it should be good for a week or more.

Use this broth in pretty much anything where you might otherwise use water and would like a little bit of chicken flavour instead: rice, stir-fry, gravies, and as a base for soups.